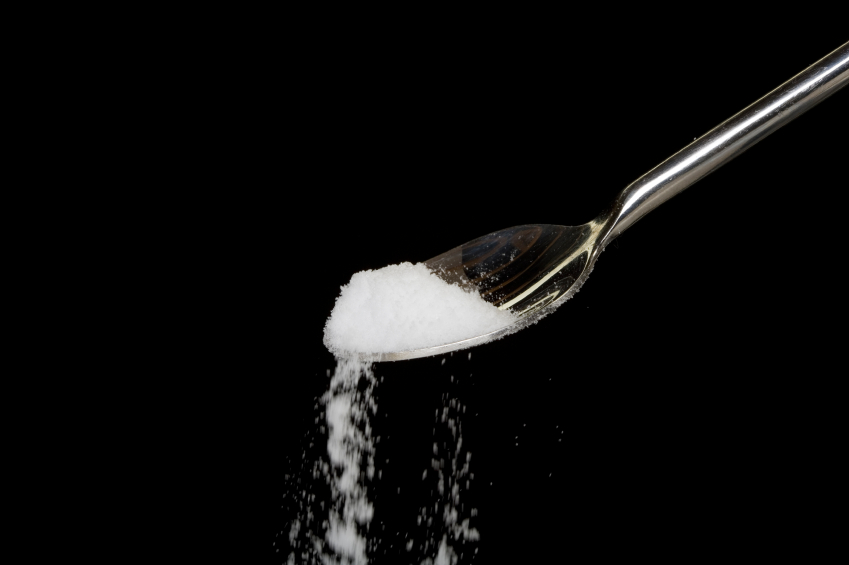 Have you ever been asked, “would you like to sweeten your food or beverage with chlorine, heavy metals, arsenic or methanol?”. No, of course not, but you may have been asked if you would like to use Splenda, also known as sucralose. Splenda is an artificial sweetener which contains all the above ingredients.

We have all seen those commercials on television that say “Splenda is made from sugar, so it tastes like sugar” and “Think sugar, say Splenda”. The truth is that it is an artificial chemical sweetener manufactured by adding three chlorine atoms to a sugar molecule. It is these chlorine bonds that make Splenda taste 600-1,000 times sweeter than sugar. Johnson & Johnson claims that the chlorine added to sucralose is the same as the chlorine atom found in table salt. This is not the case.

The makers of Splenda claim that a vast majority of this artificial sweetener passes through the body without being broken down or changed in any way. They also claim that the small amount that is absorbed passes through the body very quickly and is then excreted in the urine. The truth is that as much as 20-40% of absorbed sucralose is metabolized and has been found to concentrate in the liver, kidneys and gastrointestinal tract. Splenda is a chlorocarbon much like a pesticide, chlorocarbons have been linked to organ, genetic and reproductive damage. Sucralose breaks down into a chemical called 1, 6-dichorofructose, a chemical that has not been adequately tested in humans.

There has not been one single long term human study to determine the potential health effects of Splenda. However, short term research in animals have shown that sucralose caused shrunken thymus glands, enlarged liver and kidneys, atrophy of lymph follicles in the spleen and thymus, reduced growth rate, decreased red blood cell count, hyperplasia of the pelvis, extension of the pregnancy period, aborted pregnancy, decreased fetal and placental weights and diarrhea. One small study does exist on human diabetic patients that shows while using Splenda there were significant increases in glycosolation in hemoglobin which lessens the control of diabetes.  However, the Splenda web site states that “this no calorie sweetener is safe for the whole family, including children, women who are pregnant or nursing and even people with diabetes.”

According to Consumers’ Research Magazine “There is no clear-cut evidence that sugar substitutes such as Splenda are useful in weight reduction. On the contrary, there is some evidence that these substances may stimulate appetite”. According to the experts, artificial sweeteners suppress serotonin, cause an increased craving for sweets and robs your body of chromium, thus upsetting the insulin resistance mechanisms, which cause your pancreas to increase insulin production and in turn causes increased fat storage. Unfortunately Splenda is found in nearly 3,500 food products and amazingly not all of these products list Splenda as an ingredient. Remember to look for the word sucralose on the label. Any product that is labeled sugar free will usually contain an artificial sweetener. There are absolutely no side effect warnings listed on any of these packaged foods and you will never see statements that the product you are about to consume contains chlorine. We recommend  cutting out packaged foods, ice cream, sodas and other beverages that contain zero sugar or low sugar as these are the most likely to contain artificial sweeteners. This article is focused on Splenda but don’t be fooled — there are several other artificial sweeteners that are just as dangerous. If you need more information check out www.mercola.com.

To sweeten your coffee, tea or lemonade reach for the all natural, zero calorie sweetener Stevia. Stevia is a unique plant native to the areas near the rain forests of northeastern Paraguay. Stevia contains glycosides which are compounds within the leaves that give them their sweet taste. Glycosides are neither absorbed nor assimulated therefore there is no insulin response rendering stevia a zero on the glycemic index. In contrast,  Splenda has a glycemic index of 80, sugar has a glycemic index of 70 and fructose has a glycemic index of 20. Stevia also contains two compounds of inulin. Inulin is a prebiotic whose primary function is to nourish the good bacteria intestinal tract. These bacteria are critical  for cleansing the colon, improving regularity and preventing the overgrowth of Candida, E.coli, and salmonella.  Stevia is safe for both diabetics and hypoglycemics and is a remarkable sweetener for any beverage. Stevia is also excellent for both cooking and baking. In general you would use just 1/3 the amount of sugar used when substituting in recipes. This amount will vary however. Also remember that you will need to replace the bulk lost when the sugar is removed with ingredients such as applesauce or flour. Below are some wonderful recipes for you to try …without the guilt!

Preheat oven to 375 degrees. Oil muffin tins. Cook yams them peel skins off. Put aside to cool. In a mixing bowl, beat the eggs into the oil with a wisk. Beat in the Turbinato sugar, stevia extract, stevia concentrate, and maple syrup. In a cup, mix lemon juice and milk. Set aside. While milk is fermenting, sift dry ingredients together and chop the pecans. Beat the soured milk into the egg mixture. Stir in the yams. Leave the batter a bit lumpy. Fold in dry ingredients. Add the pecans just before the flour is completely mixed in. Spoon into oiled muffin pans. Bake 25-30 minutes. Remove from pan and cool on a rack.
Yield: 12 muffins.

Preheat oven to 350 degrees. In a medium bowl beat together butter, oil, stevia, vanilla extract and eggs. Sift or stir together dry ingredients and stir into butter mixture using a mixing spoon. Add apples and walnuts and mix in. Batter will be stiff. Turn into oiled and floured 9-inch square baking dish. Bake 300 degrees for 35-37 minutes. Cool about 10 minutes then cut into squares.
Yields: 16 bars.

Preheat oven to 325 degrees. Sift together the flour, baking powder, salt and stevia powder in a large mixing bowl. Cut the butter into the dry ingredients with a pastry blender until mixture is crumbly. Add the cream, and mix the ingredients with a wooden spoon to form a soft, tacky (not wet) dough. Turn out the dough onto a lightly floured surface and knead about ten times. Gently roll out the dough from the center to a ¾ inch thickness. Cut dough with a biscuit cutter and place rounds on an ungreased cookie sheet. Bake 10-12 minutes or until golden brown.
Yields: 24 biscuits (1 ½ inch thick).

Mix cranberry juice, apple juice, carbonated water, and stevia extract together in a large pitcher. Chill for minimum 1 hour and serve. Garnish with orange or lemon slices and mint leaves. Substitute with other flavored juices like pomegranate juice for some tasty variations.
Yields: 8 servings.