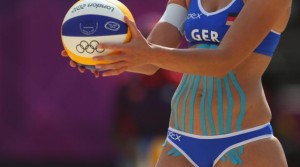 Strips of brightly colored tape adorning the arms, legs, and torsos of many top athletes is more than just a fashion trend, many believe it has medical benefits.3 The Kinesio Taping Method claims it can alleviate pain, reduce inflammation, relax muscles, enhance performance, and help with rehabilitation as well as supporting muscles during a sporting event.3  It is currently being used by therapists to change muscle tone, move lymphatic fluids, correct movement patterns, improve joint alignment by affecting the muscles and fascia and improve posture. 2,3 The tape was invented by Japanese chiropractor Kenzo Kase in the 1970s after many unsuccessful attempts to use adhesive tapes that were commercially available.2,3 The systems affected by the body are thought to include the circulatory/lymphatic, neural, muscular, and fascial systems, as well as the joints. 2 Kinesio Tape is a latex-free, hypoallergenic, cotton fiber tape with an acrylic heat-activated backing that is wearable for days. It was designed to facilitate the body’s natural healing process while providing support and stability to muscles and joints without restricting the body’s range of motion as well as providing extended soft tissue manipulation to prolong the benefits of chiropractic adjustments.1,2

The Kinesio Taping Method differs from athletic strapping tape and the traditional McConnell Taping Method.2 Athletic strapping tape is used mostly to limit ranges of motion and to constrict muscle movement and is typically removed after the end of an athletic event.2 The McConnell Taping Method uses a very rigid, highly adhesive tape and is applied to body parts to affect a specific movement, it can only be used for no more than 18 hours and often for shorter periods of time due to discomfort. 2 Kinesio Tape was designed to approximate the weight and thickness of skin, and run with the contours of the skin, instead of creating the constant pulling that occurs with other taping methods.2, 3 Because it runs along the contours of the skin it reduces tension on certain muscles and friction between the tissues thus allowing free movement of lymphatic fluid, blood and lactic acid. 3 This space also houses various nerve receptors that send specific information to the brain.2 Kinesio Tape alters the information that these receptors send to the brain and causes a less reactive response in the body, allowing the body to work in a more normal manner and removing some of the roadblocks that normally slow down the healing process.1,2 The end results are believed to be reduced muscle fatigue, increase in range of motion, and better quality of muscle contraction.2 It may also be used over a longer period of time, and although it has not been found to give instant relief, after 24-48 hours it has been reported to give fairly good pain relief.2,3